Bob began his working career in Architecture after graduating from the University of Toronto School of Architecture in 1968. Since then, Bob has designed and monitored many large scale construction projects such as 1000 beds of student housing for three Ontario colleges. Bob designed many academic buildings, lofts, duplexes as well as hundreds of other projects including industrial, commercial, residential and academic.

Between 1986-1996, Bob was on the Board of Directors for the Bruce Trail Association where he assisted with land acquisition and fundraising. Here, he identified 15 properties that have since been acquired!

In 1997, Bob founded the Escarpment Biosphere Conservancy along with Dan King, Robert Wilson and Ted Cowan. Bob works full-time for EBC and as Executive Director, he has many different roles. Since 1997, Bob has been responsible for creating 186 nature reserves, 60 km2 of land with 62 species of conservation concern. Bob has created more than 15 severances with municipalities, Counties, Niagara Escarpment Commission, acting as planner. Other duties involve creating species lists for properties and writing baseline reports with identification of rare species. Since 2013, Bob has written a full page quarterly article for Niagara Escarpment Views on various conservation topics.

"I'm working to set aside natural areas so my grandchildren and their grandchildren will be able to experience what I saw as a child." - Bob Barnett 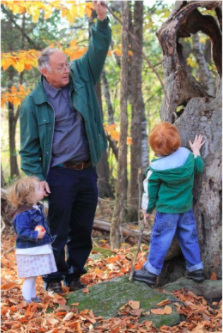