Davidson consists primarily of cultivated fields and Significant Woodland with two streams flowing through it, one which originates on the nature reserve from a natural spring.
Falling within the Meaford Ecodistrict (6E-4) covering much of the south shore of Georgian Bay, it is characterized by a gently rolling landscape ranging in elevation with shallow calcareous, coarse-textured morainal deposits dominating the landscape. A major feature of the area is the Niagara Escarpment, a Paleozoic bedrock ridge formed through the differential erosion by ice, water, and wind over millions of years. The area is associated with the Eastern Temperate Deciduous Forest Vegetation Zone. Tree species include sugar maple, American beech, paper birch, eastern hop-hornbeam, which ash, American basswood, oak species, large-toothed aspen, trembling aspen, American elm, and black cherry.
The nature reserve is characterized by two main vegetation communities: Dry-Fresh Sugar Maple Deciduous Forest Ecosite (FOD5) and cultivated cropland/Cultural Meadow (CUM). The cropland located on the northern half of the land and is comprised of 39.44 acres of tall grasslands used for haying. These grasslands are habitat for Avian Grassland Specialists like Eastern Meadowlark and Bobolink. The vegetation cover is a mixture of Timothy Grass, Smooth Bromegrass, Reed Canary Grass, and other typical pasture grasses. These grasslands are being maintained in such a way as to prevent the disturbance of breeding birds, so haying of these fields is done after the end of July. The northeastern field has a large patch of Common Milkweed, which is being maintained for Monarch habitat.
The southern forested area of the nature reserve falls within the regionally significant kemble forest life science ANSI, which connects to the Provincially Significant Kemble Wetlands Life Science ANSI (600m southwest) and two different provincially significant wetlands: Indian creek wetland and mountain lake skinners marsh. There are four EBC nature reserves within 5-km of the Davidson totaling 283 acres; Halliday Conservation Agreement & North Kepple Amik Preserve to the north, Edwards Kemble Nature Preserve to the east and Peabody Kemble Nature Reserve to the southeast. In addition, within 5-km of Davidson, Bruce Trail Conservancy protects 660 acres of land, Ontario Heritage Trust protects 412 acres of land and Grey Sauble Conservation Authority manages 3,530 acres of land.
During a site visit on April 19, 2022, American Hart’s-tongue Fern (Asplenium scolopendrium var. americanum) was found in the deciduous upland forest towards the southeast of the property, on calcareous rock in deep shade on a slope of the deciduous forest. The woodland is also habitat for Butternut (Juglans cinerea), which have been observed over the years by the landowner and have been reported on neighbouring properties. The grassland habitat provided by a hayed farm field provides excellent breeding habitat for Bobolink (Dolichonyx oryzivorus) which were observed on June 23, 2022, during a grassland survey by EBC and OLTA staff. During this survey an Eastern Meadowlark (Strunella magna) and an Eastern Wood-pewee (Contopus virens) were observed singing on the tops of the hedgerows separating the fields.
A research grade iNaturalist observation of an Eastern Wolf (Canis lycaon) track was observed on September 18, 2020, directly east of the property on the adjacent road allowance / Bruce Trail. Eastern Wolves are not restricted to any specific habitat type but typically occur in deciduous and mixed forest landscapes and is plausible that Davidson is part of the wolf’s territory. 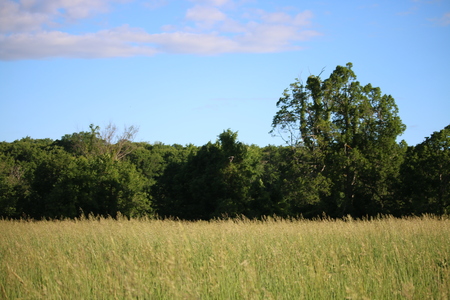