This month we applied for species at risk stewardship funding for grassland habitat restoration and herpetofauna (snake and reptile) monitoring and signage. Hopefully, this funding will come through so we are able to conduct more herp monitoring on our properties in Northern Bruce.
Zinkan Cove is one of our Northern Bruce nature reserves, located on the west shore of Lake Huron, set on 13 acres of Ontarian land. Undeveloped shoreline is very rare on Lake Huron. The property is owned by North American Native Plant Society (NANPS) and covenants held by the EBC as a protected area since 2002.
There are four EBC nature reserves within a 3 km radius of Zinkan Cove (Begg, Harkins, Sadler Creek and Turner).
Significant features:
Zinkan Cove is largely dominated by two habitat types: a rocky open shoreline of approximately 360m that borders a dense forest. Balsam fir is the dominant tree species with quaking aspens, white cedars, and white birches also very common. One provincially rare species, roundleaf ragwort, was found in the woodland along with many sedges, mosses, grasses, woody plants, forbs and two species of ferns, lady fern and spinulose wood fern.
Menzies’ rattlesnake-plantain, an indigenous white-flowered orchid once considered rare in Ontario, also grows in the forest.
Zinkan Cove is the perfect habitat for the threatened Massasauga rattlesnake which has previously been reported to be seen here by Natural Heritage Information Centre. Further monitoring is important to confirm the presence of this species on this property. 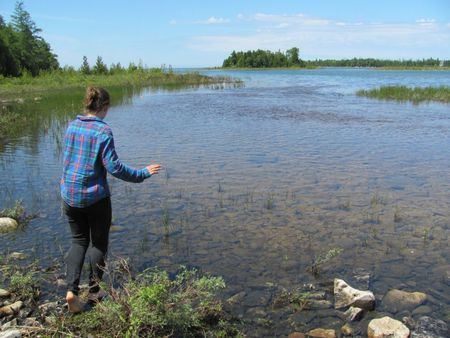