Ontario’s Algonquin Wolf population is estimated to be fewer than 500 mature individuals!

Identifying Features: The Algonquin Wolf is often difficult to distinguish between the eastern wolf, grey wolf and coyote because of its similar appearance (color & markings) as well as overlap in size. This is due to hybridization of the three. Algonquin Wolves tend to be larger than Coyotes but smaller than Grey Wolves.

Habitat: The Algonquin Wolf favours deciduous and mixed forests. The photograph on the left, taken from Heaven's Gate trail, located between Killarney and La Cloche shows a favourite haunt. The trail is part of a 1,984 acre piece of wilderness EBC is desperately trying to protect! Algonquin Wolves roam here! Heaven's Gate is "For Sale" now and at risk of development. Help ensure EBC secures this piece of heaven for Algonquin Wolves, 11 other Species-At-Risk, and for all for generations to come. Donate or pledge now.

Behaviour: It is most prevalent in areas with both abundant prey (Beaver, White-tailed Deer and Moose) and low levels of human-caused mortality. 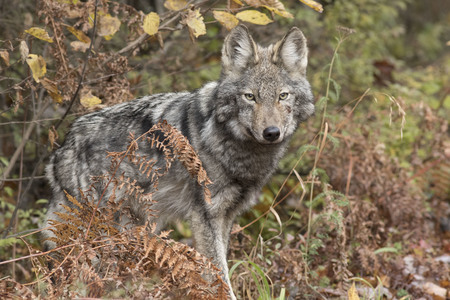