The eastern white cedar is also commonly known as the northern white cedar, swamp cedar or arborvitae (meaning tree of life). It is a coniferous tree that is native to Canada spanning from Manitoba to the easterly provinces. It can be typically found in sphagnum bogs, in swampy areas or in very shallow dry soils where limestone is the predominant underlying rock.

Defining Characteristics:
- Bark is thin, shiny and reddish-brown when the tree is young. As it matures, the bark separates into flat narrow strips.
- Small scaly yellowish-green leaves cover the tree’s fan-shaped twigs.
- Cones are 7 to 12 millimetres in length and grow in clumps of 5-6 pairs.

What animals use Eastern White Cedar?
White-tailed deer like to spend their winters in or near forest groves of the eastern white cedar feeding on the leaf-covered twigs. Snowshoe hares, porcupines, red squirrels, birds and insects also benefit from this tree as habitat.

Did you know?
People have used Eastern White cedar for a variety of purposes historically.
The essential oil found within the plant has been used for soaps, cleansers, disinfectants, and insecticides. White cedar also has a very high concentration of vitamin C and there have been recounts of people using it as a tea, believed to treat and prevent disease. The leaves and inner bark can be used to make dyes. The boughs have often been utilized for fencing as it’s resistant to rot and used for building canoes and longhouses. The outer bark can also be used for weaving. 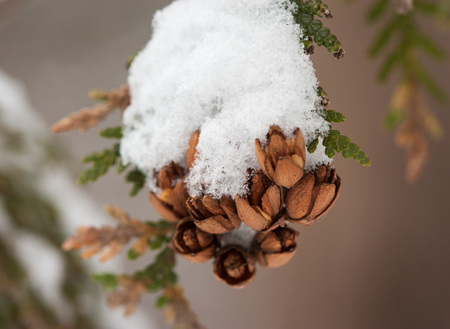