Characteristics:
- The eastern wood-pewee is a relatively small forest bird (growing to approximately 15cm in length)
- Both male and female adults are predominantly greyish-olive on their upperparts and a light grey on the underparts and bars on their wings
- They have long wings and tails that distinguish them from other similar species
- Distinctive, clear, three-part song. Sounds like “pee-ah-wee”.
Habitat:
Eastern Wood-Pewees prefer deciduous forest and woodland for nesting, although they may be found in practically any wooded environment, even tiny woodlots, as long as it is sufficiently open. They are seldom found in coniferous forest.
Behaviour and Diet:
Eastern Wood-Pewees are sit-and-wait predators. They perch high up in trees, in arboreal locations - generally in exposed locations for good viewpoints, waiting for insects to fly close enough. Once they have spotted their prey, they dart out to catch passing insects. Once their food is captured they return to the same perching spot or somewhere close by. The Wood-Pewee tends to sing most frequently at dawn and dusk. However, they can continue to sing long into the night after other songbirds are fast asleep.
Threats:
The Ontario Breeding Bird Survey data indicate an average annual decline of 2.75% between 1970 and 2011. Using data presented in COSEWIC 2012 the findings suggest a 2.62% decline between 2001 and 2011. This equates to a decline of approximately 68% in Eastern Wood-Pewee's population decline between 1970 and 2011 and a 23% decline between 2001 and 2011.
While the exact reason for their decline is uncertain, it is likely due to:
- Habitat loss and degradation as a result of urbanization and/or changes in forest management
- Reductions in the availability of their food source
- Increase in predator numbers which result in a loss of eggs and fledglings (e.g. blue jays, red squirrels)
- Changes in forest composition caused by over-browsing by white-tailed deer, which may lower the number of insects available to them.
Eastern Wood Pewees and EBC:
Despite Eastern Wood Pewee's declining status, they have been spotted on 26 of EBC's nature reserves. Support EBC acquire more Ontarian land and preserve these dwindling landscapes permanently. Donate here: www.escarpment.ca/donate 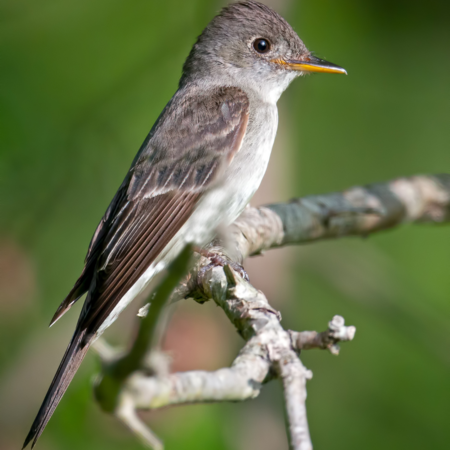