Great Sundews can be found in open, non-forested habitats with wet, often acidic and nutrient-poor soils. Habitats like these include bogs, quaking bogs, fens, cobble shorelines, and other calcareous habitats. The species is often associated with sphagnum mosses and can grow in a soil substrate that is entirely composed of living, dead, or decomposed sphagnum. The sphagnum acts to wick moisture towards the soil which acidifies it at the same time. The soil nutrients that do not seep away by the constant moisture are often absorbed by the moss or made unavailable by the soil's low soil pH. As nutrient availability is low, the Great Sundew is able to flourish with limited competition by other plants.

Like all sundews, D. anglica is a carnivorous plant. Living in soil that lacks nutrients is the very reason they trap insects as food. Long tentacles extend from each leaf, with a sticky gland located at the tip. These droplets look like dew glistening in the sun, hence where they get their name from. The glands produce nectar to attract prey, a powerful sticky substance that traps them, and enzymes to digest them.

Great sundews have been found on the following EBC reserves: Alvar bay, Barney Lake, Williams, Willisville. The photograph above was taken by Ashley on a recent trip to Willisville.

EBC also has other members of the Drosera family found on our reserves:

These are beautiful, fascinating little plants. If you get a chance to visit any of the above reserves, look out for the sundews! 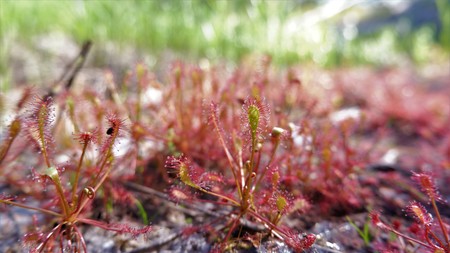