The Northern Pitcher plant is one of roughly 600 carnivorous plant species around the world and can often be found in nutrient-poor bogs. These carnivorous plants are easily recognizable by their specialized bell-shaped leaves or 'pitchers' which can collect rainwater. The pitcher's rainwater pool entices insects like flies, moths and wasps to come and drink from.  The insects then become trapped inside the bell-shaped leaf and are subsequently broken down by a combination of the digestive enzymes produced by the pitcher plant and microorganisms living in the rainwater.

Until more recently, it was believed that Pitcher plants just had a hunger for invertebrates. It wasn't until a professor of Biology, M. Alex Smith, from the University of Guelph accidentally discovered a spotted salamander inside a northern pitcher plant while out in the field with university students in Algonquin Provincial Park. This was believed to be the first record of plants consuming vertebrates in the whole of North America!  Since the accidental discovery, further research found juvenile Spotted Salamanders in 1 out of every 5 Northern Pitcher plants! Scientists believe they can digest a juvenile in as little as 10 days. The exact reason behind how the salamanders become pitcher food is unclear. However, one possible explanation could be that salamanders are looking for refuge from other predators, thinking they have found a safe place to hide inside the bell-shaped leaf. Another reason could be that the salamanders are attracted to the abundance of insects that swarm the pitchers, therefore it's easy pickings for the salamanders. 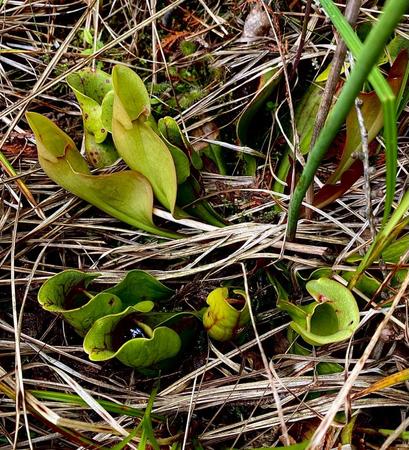