The osprey is one of the most widely distributed birds in the world. They can be found near most bodies of water including the shorelines of large lakes and rivers, ponds, and reservoirs. In the winter months, Ospreys migrate - flying to Latin and South America.

Ospreys are masters of fishing - they eat lots of shallow swimming fish. Fish however are not the only item on the menu. They have also been witnessed to occasionally eat other birds, snakes, voles, squirrels, muskrats and salamanders.

Stick nests are built by ospreys at the tops of damaged spruce or pine trees. If these trees aren't available, they'll nest on the ground, usually on large boulders in waterways where terrestrial predators can't get to them; they may also seek power pylons, chimneys, and constructed platforms (put up to encourage osprey nesting by wildlife managers).

Ospreys can build nests that are 10-13 ft deep and 3-6 ft in diameter, large enough for a human to sit inside! These large nests are built after generations of adding to the nest year after year.

Early in the breeding season, foundation nests are built, but construction and perfecting can continue throughout the season. Every year, ospreys return to the same nest, and they make any necessary repairs to the nest from the previous year.

During the 1950s and 1960s, ospreys all over the world, like many other birds of prey (high up on the trophic levels), faced serious reproductive difficulties. These issues emerged mostly as a result of the extensive use of organochlorine pesticides, particularly DDT. DDE, which is a byproduct of DDT when it decomposes, causes thinning of the eggshell membranes. As a result, when the females lay on their eggs, they would break under her weight. Since the use of DDT has been greatly restricted almost everywhere, numbers in regions where the species still have adequate nesting habitat have seen their populations rebound significantly.

Ospreys have been observed on a few of EBC's nature reserves. More recently they have been spotted on a 98 acre nature reserve acquired this year - Orlowski, located in Wiarton, Ontario.

EBC will be holding an opening event at Orlowski on October 17th between 1-3pm. Join us for a FREE day of exploring and learning alongside wildlife professionals and enthusiasts as we hold a bioblitz/nature scavenger hunt. To learn more about the day and to register, You may be lucky enough to spot the resident ospreys for yourself! Bring a pair of binoculars if you have some! 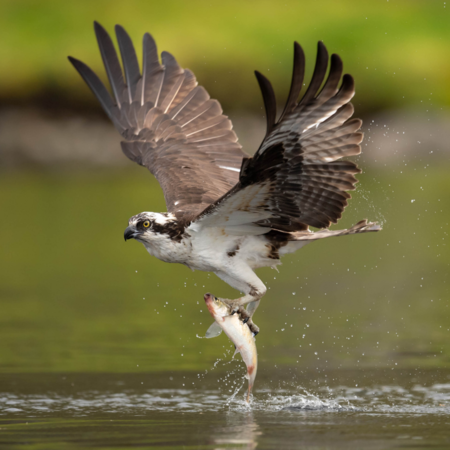