Tamarack, otherwise commonly called eastern larch, and can be found in every province and territory in Canada. Tamaracks are among the few conifers that lose their leaves in the Fall. Before their leaves are shed, their needles take on a beautiful Fall coloration.
Although Tamaracks can grow on many sites, it prefers swamps or wet organic soils and is usually associated with Black Spruce.
Defining Characteristics:
- Medium tree reaches 20 metres tall.
- Stem can be up to 60 centimetres in diameter.
- The bark is tight and flaky, pink, but under flaking bark it can appear reddish.
- Tamarack needles are short, soft, and tightly clumped on side shoots in groups of 15-20. They can sometimes be confused by the European larches which are not native. They can be differentiated from the European versions by the length of their needles and size of their cones. Tamarack needles are short (2-5 cm long) and have much smaller cones
- The young cones are a beautiful red wine colour.
What animals use Tamaracks?
The small yellow-brown cones contain seeds that are readily eaten by chipmunks, mice and red crossbills. 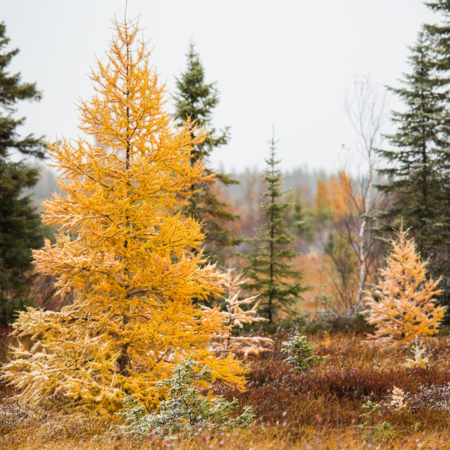