John Willetts was president of Friends of Claireville in the Toronto area, a fairly active network of environmental groups. During this time, he was introduced to EBC's Executive Director, Robert Barnett for the first time. Then he later saw Bob at a community display up north.
Once John acquired his 50-acre property in the Bruce Peninsula a few years ago, he was looking for advice and direction to work with other conservation groups on the Bruce Peninsula. John's land is just south of Tobermory. His research directed him to the Bruce Biosphere and EBC. John then recalled his connection with Bob Barnett and reached out to describe where his property was. Bob informed him that EBC had just bought the nature reserve next door which would link his 50 acres with the 150 acres that EBC had recently acquired. This 150 was an addition to Sadler Creek nature reserve (totaling 1242 acres). It was a perfect fit for EBC to work with John and his property.
John wanted to connect with EBC because EBC's values and principles lined up with his own. He bought his 50 acres with the intention of restoring it to pre-colonization status. And with the large expanse of land EBC cares for, there is opportunity to recreate interior forest habitat which is virtually gone now in Ontario, as well as much needed wetland protection. John also sees huge potential for research on his plot of land against EBC's neighboring property - they had both previously been logged and there is an opportunity for comparative research to be conducted both from an active and a passive restoration capacity. John is actively restoring the land he owns - restoring the beaver pond, restoring streams, putting in bird boxes etc. Whereas EBC protects land in a more passive sense and lets nature do the work itself (for the most part!)
John spends quite some time picking up garbage on his land and helped our conservation coordinator, Liv Callo, get familiar with the property. Familiarizing her with the terrain of the area and wildlife already present. John has conducted simple audits, and monitors the property regularly as well as keeping track of species found on the property and keeping an up-to-date species list. There are 5 different types of orchids present and massasauga rattlesnakes. John has also assisted in locating and establishing bird recording on the property and sending the data back to EBC to be analyzed.
Over a series of years, he has arranged for 4000 seedlings to be planted on his land as part of his restoration efforts! Thank you for all you do for us and conservation John - we are very lucky to have you as part of the EBC family. 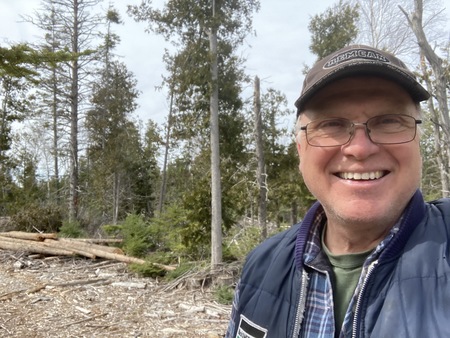